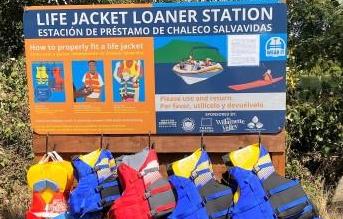 BEND, OR -- More than half a dozen people have died on Oregon waterways in just the past two weeks. The most recent apparent drowning was in Cottage Grove Lake, in Lane County. A 75-year-old man went into the water while boating Tuesday and didn’t resurface.

Ashley Massey, with the State Marine Board, says environmental factors can have a big impact on a person in the water, "Exposure to sun, to heat, to glare on the water, to wind, to noise. And then you add on top of that physical exertion, like swimming and getting back out, chasing your friends, jumping off a dock or any of that other activity."

She says victims don’t realize they’re in trouble until it’s too late, "Often times, when you’re just lounging around and floating on a lazy river, you may not recognize those impacts on your body, until you have to exert yourself."

Massey says there are proactive steps you can take, "Staying hydrated with water. Avoid the caffeinated drinks and alcohol, of course; any type of impairing substance. Also, wear a hat and sunscreen, and that glare really does impact you so wear sunglasses, too. And then, take frequent breaks in the shade." And, she urges everyone to wear a lifejacket, regardless of swimming ability.

Since July 22nd, incidents in the Portland-metro area and Lane, Deschutes and Jefferson counties claimed the lives of at least seven people. While one victim was 17, most are adults. Massey says around 85% of victims in fatal boating incidents were not wearing a life jacket, "It’s state law that if you’re in a boat that’s underway and you’re under 13, you have to wear a lifejacket. And we’re not seeing those kids get injured or involved in fatal accidents. We need to incorporate, not just what we tell our kids but take that behavior on ourselves." Click HERE for a map of life jacket loaner stations around the state.

According to the Oregon State Marine Board, there have been 11 recreational boating fatalities so far this year; six occurring in July. Seven involved nonmotorized watercraft like kayaks, canoe, raft, SUP or sailboat. Four were motorized, involving open motorboats and a personal watercraft.