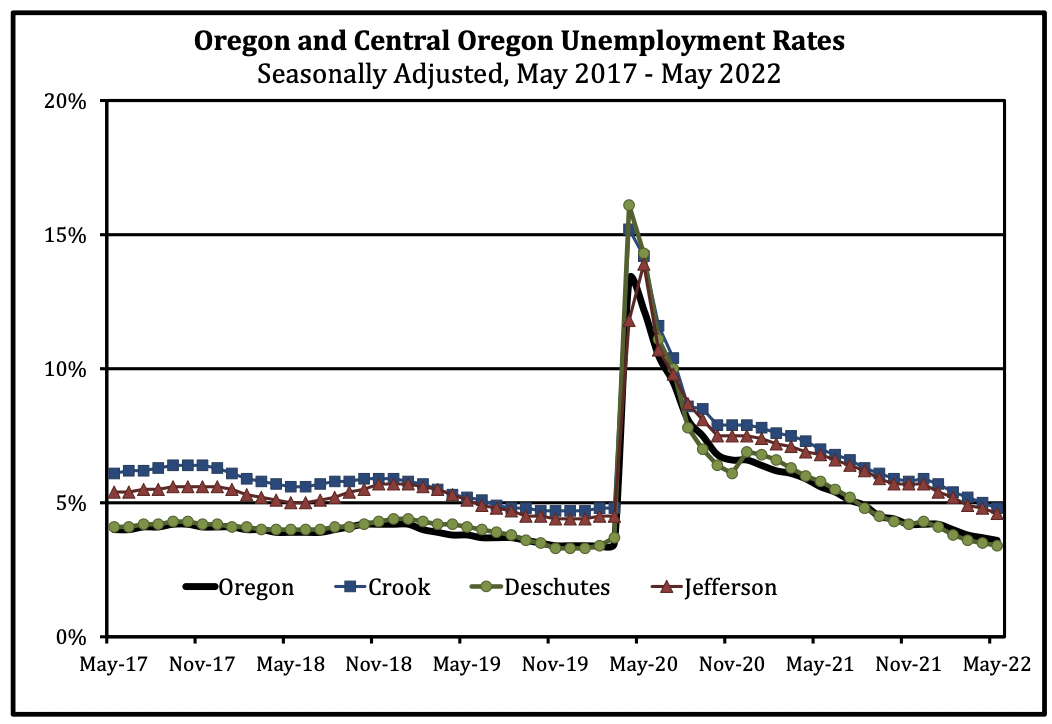 BEND, OR -- All three Central Oregon counties saw improved jobless numbers again in May. Jefferson County’s unemployment rate was 4.6% in May and Crook County's was 4.8%. Deschutes County’s jobless rate is now 3.4%; that's just a tenth of a point above the record low set right before the pandemic. But, Regional Economist Damon Runberg says it's no longer the fastest growing metro area, with employment expanding by just 2.5% last month. "That puts us now towards one of the slowest growth metro areas in Oregon. Portland is faster now, Eugene is faster, Corvallis is faster, Salem. The reality is, those are still metro areas that are continuing to try to recover from the pandemic. We’re just in a whole different phase of the labor market today, in Central Oregon."

That slowdown is not due to a lack of available jobs. "The level of hiring demand as measured by help wanted ads was nearly identical to what it was last summer, at a time when we were growing faster and still 77% higher than it was back in the spring of 2019," Runberg tells KBND News, "So, businesses are still trying to hire like crazy, but we’re not seeing it show up in jobs because, just lack of labor."

And that ongoing labor shortage means more job opportunities for teens who are taking advantage of signing bonuses and higher wages, "In the last six months to a year, we’ve reversed a 20 year trend of declining rates of participation by young people, and they are reengaging in the labor market." He says the hospitality industry lost a lot of workers during pandemic shutdowns who found better pay and more stability in other fields. When things re-opened, they didn’t return, "These restaurants, these hotels are sort of left with, ‘well, who do we have left?’ And, they’re able to recruit young people and find folks who are sort of marginally attached to the labor market on the fringes a little bit."