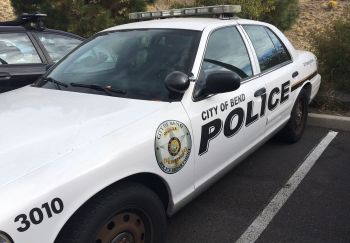 BEND, OR -- A Bend woman was arrested Wednesday morning, after a shooting. Officers responded to NE Scarlet Court at about 3:20 a.m., following a report of a woman firing a gun at a house. Bend Police and Deschutes County Sheriff’s Deputies found evidence of numerous handgun rounds being fired from a .380 handgun.

Around15 rounds were fired and several rounds struck the home and a parked vehicle. No one was injured and the house was unoccupied at the time. The shooter took off in a Jeep prior to police arriving.

An investigation by Bend Police Detectives led to the arrest of 26-year-old Megan Leeann Teeter around 09:30 a.m. at 61140 Chuckanut Drive by CERT (Central Oregon Emergency Response Team). According to the BPD Twitter account, the suspect surrendered after talking with negotiators. She was taken to St. Charles Medical Center for evaluation. She's accused of Unlawful use of a weapon, Reckless endangering and Attempted murder

The property at NE Scarlet Court is the home of a relative of Teeter. Detectives served a search warrant at the Chuckanut Drive address and seized the handgun they say was involved in the shooting.